Posted at 11:37h in Trademarks, Uncategorised by Dean Lacey

Serjeants’ expert team of trade mark attorneys discuss the most recent developments in the case regarding the trade mark dispute between Tiger King stars Joe Exotic and Carole Baskin, highlighting the importance of having a registered trade mark.

Avid viewers of the Netflix hit series ‘Tiger King’ will be well aware of the ongoing dispute between zoo operator Joseph Maldanado-Passage, better known as Joe Exotic, and Carole Baskin, CEO of Big Cat Rescue. The latest twist in the tale involves the ruling in the copyright and trade mark dispute between the two, which resulted in Exotic owing Baskin $1m (£800,000) in damages, legal fees and copyright violations. 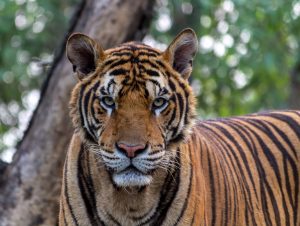 Exotic used an extremely similar logo to Baskin’s Big Cat Rescue company and was deemed to have committed trade mark infringement. Exotic failed to pay the $1m owed and has now been forced to hand over his zoo to his rival.

During the original registration process for Big Cat Rescue, Baskin was forced to disclaim exclusive use of the words ‘Big Cat Rescue’, as they were seen to be descriptive for the services she was providing. She was instead granted the rights to the mark as a whole in logo form. This meant that she could not prevent third parties from using or registering another mark for Big Cat Rescue, unless it looked identical or confusingly similar to her mark.

The courts ruled Exotic and Baskin’s marks did look similar. They both include an image of a tiger over the words Big Cat Rescue (Baskin claimed that Exotic took the image of the tiger for his mark from her website) and both parties offered the same kind of services in relation to paid opportunities to view big cats. Exotic also registered a Florida phone number so that geographically they looked to be in the same area, even though they weren’t. The combination of these factors, alongside the complicated history between the two parties, suggested that Exotic was trying to deceive the public into thinking that there was an association between the companies.

After two years and a number of other conflicts, including alleged copyright infringement, defamation claims, and Exotic declaring that he would need to sell his tigers to the pet trade due to his lack of money, a settlement was finally reached. Exotic agreed to pay damages of $653,000 and attorneys’ fees of $300,000. He also agreed to pay $75,000 for the copyright violations and to never to use the Big Cat Rescue mark or anything confusingly similar again. He later filed for bankruptcy.

However, Baskin took further legal action to ensure that she received the money from the settlement. Exotic’s attempts to avoid paying were unsuccessful and as a result he has been forced to hand over his zoo.

Beware the price of fame

Exotic is currently serving a 22 year prison sentence after being found guilty of 17 counts of animal abuse and a murder-for-hire- plot against Carole Baskin. A number of people who worked closely with him claimed that all he ever wanted was fame – we think it’s safe to say the Tiger King has certainly become famous, although maybe not for the right reasons!

The importance of registering a trade mark

Registering a trade mark allows you to prevent the use of an identical or confusingly similar trade mark for the same or similar goods or services. This is because you, as the owner, have exclusive rights to use it in the territory where it is registered.

A registered trade mark is easier to enforce against infringers in the civil courts, with Trading Standards able to take action against counterfeiters in the criminal courts. It also means that other people can easily find out that the mark is registered and avoid using it. For further information about trade mark registration, what makes a good trade mark and our trade mark watching service, take a look at our resources section here.