Posted at 12:46h in Trademarks by Dean Lacey

Upon reading the title of this blog you may be thinking how on earth is it possible for McDonalds to lose a trade mark for BIG MAC? It’s one of the most well-known fast food menu items in the world. The vast majority will know what a BIG MAC is and many will have eaten one. It’s available globally and McDonalds state they sold over 1.4 billon of them in the UK, France and Germany between 2011-2016.

Despite this however, the trade mark was revoked by an Irish burger chain, Supermac’s, due to the mark not being used on the goods for which it was registered.

How is it possible? 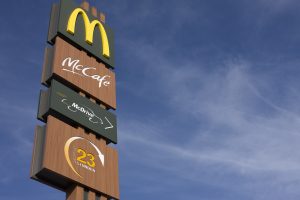 When a UK or EU trade mark registration has been registered for at least 5 years, it becomes possible for a third party to challenge that registration by filing revocation proceedings against it. Supermac’s application was filed requesting revocation of BIG MAC in its entirety, on the grounds that the mark had not been put to genuine use for a continuous period of 5 years. If a trade mark owner fails to prove genuine use on the goods and/or services that it is registered for then its registration will be cancelled.

McDonalds European trade mark registration no. 62638 for the mark BIG MAC was registered for:

In order to be successful in defending the revocation action by Supermac, McDonalds needed to provide sufficient evidence to prove genuine use of its mark on the above goods and services for the “relevant period” which was 11/4/2012 – 10/4/2017. In an attempt to do this, McDonalds submitted evidence including three statements from McDonalds’ representatives detailing sales figures for 2011-2016; brochures and printouts of advertising posters for 2011-2016; printouts from its websites from 2014-2016 and a Wikipedia entry which provided information about BIG MAC.

The EUIPO Cancellation Division held that McDonalds had failed to provide sufficient evidence to prove genuine use of the mark on the goods and services during the ‘relevant period’. Among other things, it had failed to provide evidence from third parties or confirmation of how the brochures were circulated within the EU and whether the advertising led to any actual or potential customers. The sales evidence in the statements from the McDonalds representatives was only of limited value and Cancellation Division also commented that the Wikipedia entries could have been amended by anyone and therefore could not be considered to be substantive.

The EUIPO concluded that “Even if the goods were offered for sale, there is no data about how long the products were offered on the given web page or in other ways, and there is no information of any actual sales taking place or any potential and relevant consumer being engaged, either through an offer, or through a sale. Finally, as far as the relevant services are considered, there is no single piece of evidence that refers to any of the registered services being offered under the EUTM. It follows, that an overall assessment of the evidence does not allow the conclusion, without resorting to probabilities and presumptions, that the mark was genuinely used during the relevant period for the relevant goods or services.”

The importance of ‘best practice’ processes

The surprising result in these proceedings highlights the importance of filing sufficient evidence to prove use of a trade mark. However, in order to file such evidence, you need to have it in the first place and so it’s very important for brands to keep comprehensive records of historical brand use. It doesn’t matter how well known the mark may be in reality, if the evidence submitted is insufficient, incomplete or lacking then a cancellation action is likely to be successful.

McDonalds have confirmed that the decision will be appealed so it will be interesting to see what happens next.

If you are concerned about your own trade mark registration as a result of the McDonalds case and would like advice on how to protect your brand, contact the specialist trade mark attorneys at Serjeants. Call 0116 233 2626 or send us a message here.