Posted at 14:54h in Designs by Dean Lacey

Following a widely publicised dispute earlier this year over their caterpillar cakes, the battle rumbles on between Marks & Spencer (M&S) and Aldi – only this time over the design of a light up gin bottle. In this article, the team at Serjeants shares an overview of the recent developments between the two supermarkets and highlights why Aldi may or may not have committed design infringement.

Round one: caterpillar wars

Earlier this year M&S launched legal action against Aldi for copying its “Colin the Caterpillar” cake. The dispute generated significant publicity for both M&S and Aldi, with both companies’ social media teams seeking to turn public opinion in their favour. Arguably, Aldi has had the best publicity from the “Colin” dispute; nearly every large supermarket chain has their own alliterative caterpillar cake, so the decision by M&S to only take action against Aldi does appear strange.

The case also served to highlight just how complex IP law can be and why it is important to always seek advice from true professionals in the field, as we explained in this article.

Round two: battle of the gin bottles 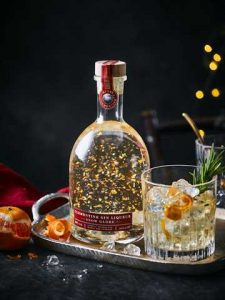 In a separate disagreement, M&S has launched a new legal action against Aldi. This time it is alleging infringement of the design of its light-up gold flake gin liqueur bottles.

M&S released its ‘M&S Light-Up Gin’ liqueurs in distinctive light-up bottles for Christmas 2021, with the product proving instantly popular with shoppers. Subsequently, and in its usual fashion, Aldi released a strikingly similar and cheaper product shortly after. M&S almost immediately launched legal action against the supermarket for design infringement.

Papers filed at the High Court on 3 December 2021 claim that since early November, Aldi has been selling gold-flake gin liqueurs in clementine and blackberry flavours with bottle designs that are copies of M&S Light-Up Gin, which were registered as designs earlier this year. A list of features M&S says are protected include the shape of the bottle, an integrated light feature, gold leaf flakes and a winter forest graphic.

It is arguing that Aldi’s version are copies that produce the same overall visual impression. In particular, the bottles are the same shape, have a similar scene printed around the lower portion of the bottle, also contain gold flakes, and are also lit from below.

M&S is specifically seeking an injunction to prevent Aldi from infringing its designs, requiring it to surrender or destroy its stock, and pay damages plus costs. However, Aldi has already rejected requests to stop selling the products.

Conversely, there are arguments against design infringement that Aldi might claim; for instance, the main images used around the bottle are different.

There is little doubt that Aldi’s product is “inspired by” M&S’s product, but we will have to wait and see if the similarity is sufficient to be found to be design infringement.

Similarly, we will have to wait and see how the court of public opinion determines the winner. Already, Aldi’s social media team have shared a series of light-hearted tweets on the matter, writing: “We Colin our lawyers #Round2#FreeCuthbert” and following up with: “We’re… GINNOCENT”.

Design infringement is a complex area of law. If you require advice on this or any other intellectual property matter, please contact the expert team at Serjeants for a free initial consultation. You can call us on +44 (0) 116 233 2626 or send an enquiry here.