Posted at 12:36h in Trademarks, Uncategorised by Dean Lacey

The well-known, anonymous street artist, Banksy, has recently had a trade mark for one of his images cancelled after it was found that his actions were inconsistent with honest practices. The IP experts at Serjeants explain the facts and why it is so important to obtain the right IP protection from the outset.

On 7 February 2014, Pest Control Office Limited (a company known to be controlled by Banksy) filed an EU trade mark application for the image known as “Flower Thrower”. This particular image was a piece of street graffiti placed on a wall on the side of a garage in Jerusalem. The mark was registered on 29 August 2014. 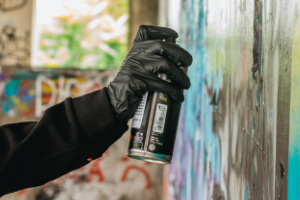 However, in 2019 an application for cancellation was filed at the EUIPO against the registration. The applicant, Full Colour Black Limited, based their claim on two grounds:

Both parties submitted evidence for and against the claims. A decision was reached on 14 September 2020.

The decision: filed in bad faith

Banksy has previously allowed third parties to use his images for commercial purposes without taking infringement action against them. While he had a statement on his website that said images should not be used for commercial purposes, the Cancellation Division determined that this was not enough evidence to show he was attempting to actively protect his Intellectual Property.

Furthermore, after the cancellation action had been filed by the applicant, Banksy set up a shop front in London and an online shop whereby the public could make an application to purchase products, in an attempt to ensure that gallery owners or resellers were not obtaining the products. When asked about this venture, Banksy stated:

“Sometimes you’ve got to work and it’s hard to know what to paint, but for the past few months I’ve been making stuff for the sole purpose of fulfilling trade mark categories under EU law.”

In saying this, he effectively admitted that the shop was only opened in an attempt to make use of the trade mark in question; when a trade mark is filed, the owner signs to agree that they have an intention to bring it into use.

The Cancellation Division concluded that Banksy’s actions were inconsistent with honest practices and he had no intention to use the mark as a trade mark, therefore it was filed in bad faith.

The artist has also previously used statements like “copyright is for losers”. Although this was not used against him in the decision, it does not show a positive intention for him to protect his Intellectual Property rights.

Using trade marks as an alternative

Banksy chooses to be an anonymous artist; nobody knows who he is. But while keeping his identity secret has proven to be a good marketing tactic, it appears to have ultimately hindered Banksy’s chances of obtaining protection; he attempted to rely on trade mark protection because relying on copyright protection would have necessitated revealing his identity.

Unfortunately for him, trade marks cannot be used as an alternative for other rights that would not be granted. For instance, there have been cases where the copyright of a work has expired due to 70 years after the death of the author passing. A trade mark has then unsuccessfully been filed in an attempt to obtain Intellectual Property protection for that work. These cases have shown that trade marks can’t be used as an alternative once your original source of protection has expired.

Don’t bite the hand that protects your IP rights!

It’s good to recognise that, despite the consumer-driven world we live in, Banksy was keen to ensure people could access his work without a charge, on the condition that they didn’t use them for commercial purposes. However, it’s worth remembering that sometimes it’s best to keep your negative views on Intellectual Property private – especially if you then decide you want to obtain and maintain registered rights.

Banksy will have the opportunity to appeal the decision, so this may not be the last we hear of it. It may also provide him with the inspiration he needs for his next piece of work!

At Serjeants, we handle all aspects of intellectual property for our clients and can help ensure you have the right protection in place. We prepare and file patent, trade mark and design applications and prosecute them to grant/registration.

For any intellectual property queries, please contact our IP experts here or call 0116 233 2626.