30 Sep BrewDog vs Aldi: why is protecting your product packaging so important?

Posted at 13:29h in Trademarks by Dean Lacey

It never comes as a surprise to hear that Aldi have made another copycat version of a well know brand. After all, selling big brand dupes at lower prices is at the core of the Aldi business model. But when the supermarket giant released a copycat product of BrewDog’s bestselling PUNK IPA, it is unlikely Aldi was expecting the response or the result it got. Serjeants’ specialist trade mark team provides further details of the recent case, and explains why protecting your product packaging is so important. 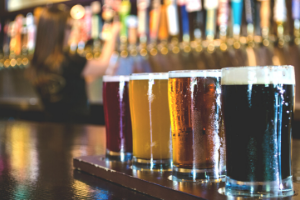 BrewDog is a Scottish multinational brewery and pub chain that actively enforces its IP rights. The company has previously successfully issued threats of legal action against small bars and brewers who have used trade marks similar to their own.

However, this has often resulted in negative press attention for BrewDog. For instance, in 2017, the company threatened legal action against a Birmingham pub that opened under the name Lone Wolf, which is the same name as BrewDog’s vodka brand. After receiving significant media backlash for its actions, the BrewDog team backed down. But the accusation of being “just another multinational corporate machine” was not ideal, especially as BrewDog is a business that markets itself as a punk, anti-establishment, independent upstart.

BrewDog’s signature drink, and the UK’s best selling craft beer of 2019, is PUNK IPA. So when BrewDog heard about Aldi’s “Anti-Establishment IPA” product, which bears an uncanny resemblance to BrewDog’s PUNK IPA, the company wasn’t happy.

Aldi is famous for selling numerous big brand lookalike products. But it is always careful to use a very different brand name so there is no cause for trade mark infringement. As such, it is notoriously difficult to prevent Aldi from copying your product. Last year, Charlotte Tilbury successfully won a case against the supermarket, but did so through taking action for copyright infringement, rather than trade mark infringement.

When the tables are turned: ALD IPA

BrewDog decided to approach the situation in a different manner. Instead of taking legal action, it took to social media and tweeted about a new beer it is releasing called ALD IPA – initially YALDI IPA, but this name changed on discovering that a smaller independent brewer already uses YALDI for beer. The new ALDI IPA beer very clearly takes inspiration from Aldi’s name and logo for its packaging; BrewDog essentially gave Aldi a taste of its own medicine.

However, things took an unexpected turn when Aldi responded to BrewDog by offering to stock ALD IPA in its stores. BrewDog accepted the offer, and also suggested that Aldi plant one tree in the new BrewDog forest for every single case the chain sells, which Aldi agreed to do. The beer will be on sale in the UK from October.

It’s interesting to see that what started as a publicity stunt by BrewDog to put pressure on Aldi to stop selling the “anti-establishment IPA”, has resulted in a mutually beneficial arrangement for both companies. Judging from the positive response that the exchange received on Twitter, the collaboration has helped both companies’ public reputations.

ICYMI:
1) @AldiUK made a fake @BrewDog PUNK IPA🤘
2) BrewDog joked we would make a fake ALDI beer 🍻
3) People loved it 😍
4) ALDI got in touch to list the fake ALDI beer 🤝
5) BrewDog & ALDI agreed for every case sold they would each plant one extra tree in the BrewDog Forest 🌳 pic.twitter.com/hQaN42sN4d

Whilst this is a unique story, it highlights just how important it is to protect your product packaging. When copycat products are made, its highly unlikely that you will be able to enforce your trade mark registration for your brand name; it’s more likely that it’s the look of the packaging that is being copied. Protecting the way a product looks – using either a trade mark registration or a design registration for the surface decoration – will provide adequate evidence to help stop competitors from copying your packaging.

If you wish to discuss protecting your product packaging or other intellectual property protection, then please contact Serjeants on 0116 233 2626 or send us a message here.